Keith Donnelly, one of the most popular, and, yes slightly crazy, figures in the folk world, teams up with the scene’s most exciting new voice and fellow Warwickshire musician – Lauren South.

Keith’s songwriting and guitar-playing often take a back seat to his onstage madcappery. Not so in this duo (He promises!). Lauren’s stunning vocals on her own originals, Keith’s, and the odd ‘trad’ songs, not forgetting her violin, guitar and Shruti box playing, never fail to ‘wow’ audiences wherever she goes.

Although this new combo might at first raise a few eyebrows, anyone who ever saw Keith work with Dark Horses, Nothing by Chance, or indeed (back in the day) Waterfall, won’t be too surprised to see him jump at the chance to work with a vocalist like Lauren. Anyone who’s heard these musicians separately will hopefully be as thrilled as we are to see the launch of this new duo.

Keith says – ‘This is probably the most important new duo since Steve Beer teamed up with that Phil Knightley!’

In this change to the previously advertised show, Keith and Lauren are supported by Mick Bisiker, Andi Wolf and Pete Willow.

Tickets available from the Albany Theatre Box Office – details on flyer below, 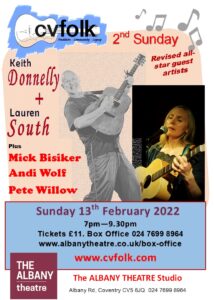 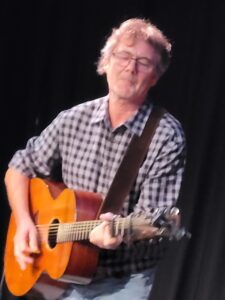