Second Sunday of each month 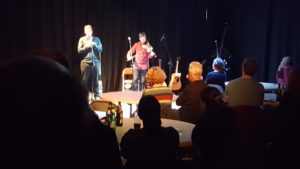 First opened in 1935, the Albany Theatre in Coventry started out as a lecture theatre for Coventry Technical College. You’ll find it on The Butts, just north of the Earlsdon district of Coventry and less than a mile from the city centre.It found a new lease of life recently after the College closed and the Albany Theatre Trust was established in 2013 to resurrect and reopen the Theatre as a multi-purpose arts centre. The main Art-Deco theatre has already played host to concerts by top-line acts such as Fairport Convention, Lindisfarne and Ralph McTell.

A conversation between Albany Theatre Director, David Meredith and CVFolk’s Pete Willow quickly established a shared view by both organisations that music is an expression of community identity and the informality of folk can reach out to – and involve – a wide range of people. David agreed for the Theatre to host CVFolk’s initial public consultation event in June 2018, which was attended by over 60 people including many local and national musicians, club and event organisers and CVFolk’s Patron Pauline Black. One outcome of this was an offer by the Theatre to host and make resources available for a monthly CVFolk event.

‘CVFolk Presents…‘, later renamed as ‘CVFolk 2nd Sunday’ takes place on the second Sunday of each month, usually in the early evening (from 7pm to around 9.30pm). It aims to provide performance space and a friendly environment where Coventry people can enjoy and become familiar with all forms of folk music and dance, with particular emphasis on local performers and organisations.

CVFolk 2nd Sundays aims to present more than a folk club or concert venue, but a regular showcase for the full range of folk-related activities that take place in Coventry and Warwickshire.

Come and see for yourselves.