Set for completion by Summer 2023, the first phase of the development will bring improvements to CVFolk’s regular venue, the existing studio theatre, plus three new studios, a new café and improved audience and community facilities.

Throughout this time, CVFolk will continue to present its monthly programme , featuring the high quality folk performers to be found in the CV postcode area and covering the breadth of styles and repertoires that come under the broad heading of ‘folk’.

Star attractions include Kristy Gallacher, Meet On The Ledge, Rob Halligan’s Homeward Hie, and annA rydeR as headline guests with a fantastic selection of acts from the local club, concert and session circuits playing support and special feature slots, bringing you the best in home-grown folk entertainment.

We also hope to announce details soon of music and song workshops and masterclasses that the refurbished Albany Theatre will be able to accommodate. Watch this site!

Four first-class acts performed at Warwick Folk Festival‘s CVFolk concert highlighting the wealth of home-grown folk and acoustic talent to be found in Coventry and Warwickshire.

Rob Halligan, Mick Bisiker, Under The Influence and Kristy Gallacher provided some brilliant music on the Jester Stage in Warwick’s Castle Park on Friday 22nd July – just one of the many fantastic events which led to the widely acclaimed success of the 4-day weekend.

Over 60 musicians and singers took part in a packed programme of concerts and sessions at the Albany Theatre, Coventry, Sunday 27 March

If you enjoy the music, remember all performances were given for free to support CVFolk’s Ukraine appeal. So please click here to donate directly to the #HELPUKRAINE Emergency Appeal.

Funds raised from CVFolk4Ukraine and its aftermath are donated to this appeal organised by the Association of Ukrainians in Great Britain. With low overheads and direct first-hand knowledge of where help is needed, the AUGB is supported by a wide range of community groups and accredited charities in Ukraine to provide food, shelter, medicines and support to the vulnerable.

Welcome and ‘come all ye’ to the folks of Coventry and Warwickshire!

Our aim is to establish Coventry as a national and international hub for innovative folk performance in its various traditional and contemporary formats. 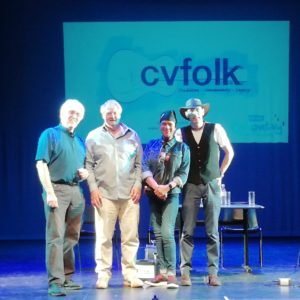 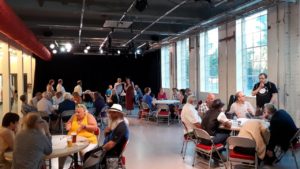 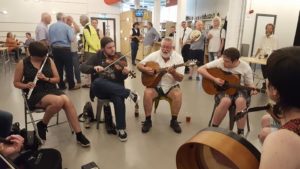 …followed by a superb session

For a quick summary of what CVFolk is all about, download our leaflet here.